Make Your Own Rattles For Kids! | Tiny Tapping Toes 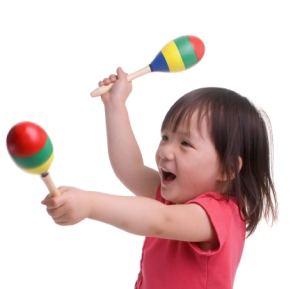 There’s a reason you find rattles in almost every culture around the globe.

They are amazingly simple and very powerful at the same time.  A child playing a rattle becomes aware of how his or her movements change the sound they are making.  They realize how the sound they create can “fit” with a beat and most studies of young children show that they are keenly aware of rhythmic patterns.  Making and playing several varieties of homemade rattles can be a great way to explore music and have fun with a young child at the same time. 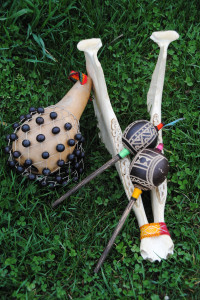 Rattles made from gourds, seeds, feathers and a donkey’s jawbone

Most early rattles were made of materials such as dried gourds, seashells, clay, coconuts, bark and a variety of other natural objects.  In Africa, caxixi rattles are made from woven fiber.  In India, special rattles are made from colorful palm fronds woven together in clever patterns.  On the coast of Peru there’s even a rattle made from the jawbone of a donkey.  In short, people make instruments from materials that they have found available near their home.  We are going to take that same approach to creating recycled rattles!

Clean and dry a variety of small plastic containers (water bottles, juice containers, etc.) and assemble some objects that can serve as the contents of the rattles. Here’s a list of common materials that work well and the type of sound they create: 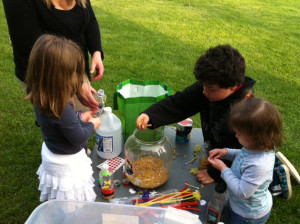 The Inside of the Rattle

Choose the objects you’d like to add to the rattle to create the sound and also consider including some decorative elements.  Since plastic containers are transparent, you can easily add confetti, glitter, colorful ribbon, pipe-cleaners or similar items. They won’t alter the sound but they will add color, beauty and interest when the rattle is being played. 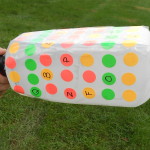 The Outside of the Rattle

If you like, you can decorate the outside of the rattle with stickers, markers or add a handle made from pipe-cleaner, yarn or ribbon.  Feel free to get creative.  When you’re done, it’s time to seal it with some sturdy tape, such as electrical tape.  This helps keep the contents inside and generally makes it more child-safe around young music-makers.

Now you’re ready to have fun with your rattle!

Shake along while you sing one of your favorite songs. Try playing slowly and shaking your rattle to the beat.  Then speed up the song. Can you keep up and keep in time?  Play along with recorded music.  Listen to different types of music and see how your rattle fits in with the music being played.

If everyone in a class or a small group has made a rattle, you try this easy game.

Ask the children to play a certain way until the music stops.  For instance, the teacher can say: “Shake your rattle softly until the music stops”.  The teacher stops the recorded music (like in a game of musical chairs) at an unexpected place and sees if all the students were able to stop at the same time.  Next, change the directions to other simple ways to play, such as:

Aside from this one game, there are lots of other ways you can make music and have fun with a rattle while you are learning, playing and recycling – all at the same time!

Here Are Some Variations On Rattle Crafts:

Make Your Own African Coffee Can Drum – https://www.teacherspayteachers.com/Product/Make-Your-Own-African-Drum-Craft-3507618

Make Your Own Maracas – https://www.teacherspayteachers.com/Product/Latin-American-Intruments-Make-Your-Own-Maracas-142802