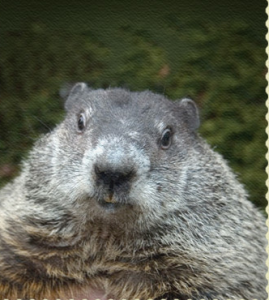 Do you love doing tongue-twisters and silly songs with your child?  Then this new song is a perfect choice for celebrating Groundhog’s Day.

Sing this song and you may discover not only how much wood could a woodchuck chuck and how much ground can a groundhog grind as well as – how much sap a sapsucker can suck!  I dare you to sing it and now collapse in giggles!

But, before you do, here are some groundhog and groundhogs day FAQ’s.

Where is the official groundhog prediction?  The official celebration is in Punxatawney, Pennsylvania where our good pal; Punxatawney Phil, gets up early and gives us his prediction of when winter will end.

Where does Phil see his shadow? The special celebration of Groundhog’s day happens on a spot called Gobbler’s Knob, right in the center of the town of Punxatawney.

What does it mean if he sees his shadow?  If the groundhog sees his shadow, 6 more weeks of winter are predicted. Not seeing a shadow means an earlier Spring (hooray!)

Is Groundhog’s Day an American holiday?  Yes, but it comes from a German custom and there are many different types of ways that animals are predictors of the weather around the world. This is a great topic to research!

What are Groundhog Lodges?  In Pennsylvania Dutch tradition there gatherings where there is food, entertainment and skits or plays at this time of year.  All who attend must speak only in Pennsylvania Dutch dialect or they are fined a nickel, a dime or a quarter for speaking English!

Are there great books about groundhogs and groundhog’s day?  Yes!  Check out our list below and “Go To Sleep, Groundhog” is a funny, cute and truly adorable pick for any home or classroom library!

Add This Song To Your Favorite Playlist 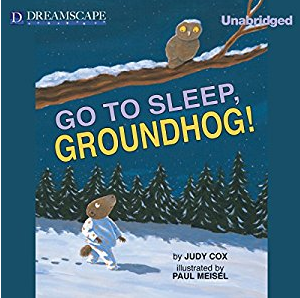 A groundhog can’t seem to fall asleep when it’s time to hibernate and has a tough time getting up when his own special holiday comes.

Ten Grouchy Groundhogs By Kathryn Heling and Deborah Hembrook
A cute counting book for young children with some good groundhog facts sprinkled in!

Groundhog Gets a Say By Pamela Curtis Swallow/Denise Brunkus (Illustrator)
A groundhog thinks his holiday should last more then one day. His animal friends help make his case for the world to know more about groundhogs.
Groundhog Day! By Gail Gibbons
Wonderful fun and great facts about groundhogs and the Groundhog’s Day celebration.

The Groundhog Day Book of Facts and Fun By Wendie C. Old/Paige Billin-Frye (Illustrator)
A sampler of groundhog facts and a good description of the special day in Punxatawny, PA.

Groundhog Weather School By Joan Holub/Kristin Sorra (Illustrator)
A groundhog is encouraged to open a weather school everyone gets to learn more about hibernation, groundhogs and the holiday.

A happy Groundhog’s Day to all!

Silly Songs for Kids: How Much Wood Could a Woodchuck Chuck?

Groundhog’s Day is on its way and it’s a great time to encourage being silly with your little ones!  Do you remember tongue-twisters from when you were a child?  Did you ever say “She sells seashells by the seashore” or wonder how many pecks of pickled peppers that peter piper could pick? Or collapse in giggles because it was really hard to say “rubber baby buggy bumpers” three times fast without totally messing it up?

Although it may not seem very serious, any time you speak or sing to your baby or child you’re increasing their intelligence and helping them develop language skills. As they listen and enjoy the sound of your voice they are developing their sense of what sounds right, even if they haven’t begun to speak on their own.

And, best if all, you are bonding.  Although a tiny baby can’t pop up out of her crib and say “Gee mom, thanks, that really made me laugh!”.  Or her toddler brother won’t declare: “Wow, that increased my vocabulary!”, children know when you are speaking to them and sense your delight in playing with words or in singing a simple song or a set of silly syllables!  It stimulates their mind and the attention makes them feel wanted, included and loved.

If you master any of the groundhog’s day tongue-twisters, you might want to reenact Groundhog’s day in your own living room.  Below is a link to an easy pop-up puppet activity.  Color your own puppet and the woodchuck or groundhog will pop out of the cup to see its shadow – or not!

So whether you’re waiting for Spring or not concerned about the weather at all, take the time to speak or sing a silly rhyme with your child.  Or try not to trip over a tongue-twister with them!  Chances are good, they will love and remember the fun you’ve had with them for a long time to come!

Lyrics to The Groundhog Day Song

The Groundhog Song (How Much Wood Could A Woodchuck Chuck?)

Words and music by Daria A. Marmaluk-Hajioannou

How much ground could a groundhog hog

If a groundhog could hog ground? (2x)

If he could hog ground,

I know he surely would!

But, how much ground would a groundhog hog

If a groundhog could hog ground?

How much wood could a woodchuck chuck

If a woodchuck, could chuck wood? (2x)

If she could chuck wood,

She would chuck wood

I know she surely would!

But, how much wood could a woodchuck chuck

If a woodchuck, could chuck wood?

How much sap could a sapsucker suck

If a sapsucker could suck sap? (2x)

If he could suck sap,

He would suck sap

I know he surely would!

But, how much sap would a sapsucker suck

If a sapsucker could suck sap?

Some Popular Tongue Twisters (In English)

She sells seashells by the seashore.

I saw Esau sitting on a seesaw.  Esau, he saw me.