Caroling In Greece With A Musical Triangle!

Did you know that many countries around the world have holiday caroling traditions? And in some places caroling is accompanied by unusual instruments or different superstitions and traditions?

My husband grew up in Greece and has fond memories of caroling with a triangle during the Christmas season. He and his brothers and sisters would go door to door and even on the bus to sing special songs with the accompaniment of a triangle. If you stopped and listened – you had to give a coin or a small donation to the carolers. What fun!

In Greece, Christmas carols are called calenda (or kalenda). Although you can hear them 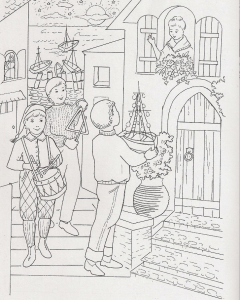 throughout the holiday season, there are three official caroling days – Christmas Eve, New Year’s Eve and January 5, the Eve of the Epiphany. During the twelve days of Christmas (December 25 – January 6th), some people in Greece keep fires lighted because of the superstition that a goblin might enter a house (by the chimney) and play tricks on people. In more modern times, you will see brightly colored lights on Christmas trees and also on boats because Saint Nicolas (aka St. Nick, aka Santa Claus) is the protector of sailors.

You can see one of the traditional carols sung here along with photos of children out caroling with their little drum and musical triangle:

In this version you can hear the song and see the English translation of the lyrics:

Share
This entry was posted in First Instruments, Holiday Songs, Simple Instruments and tagged Caroling In Greece With A Musical Triangle, holiday traditions. Bookmark the permalink.