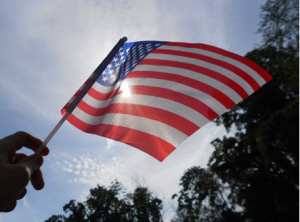 Wishing everyone a happy, harmonious fourth of July!

If you’re looking for a fun soundtrack for a family gathering or 4th of July picnic, stop by our KIDS ROAD TRIP series and download an mp3 of this classic song loved by grown-ups and kids of all ages.

Curious about the song, Grand Old Flag? We did a short post a while back on the song’s history and how it was inspired by a World War One Vet! You can check that out here:

And last but not least, click on this video link for a shower of stars, stripes and flag-related fanfare while you enjoy your special day!

Almost anyone can sing the chorus to this popular patriotic song that dates back to 1906.  But did you know it was originally written with the title – You’re A Grand Old Rag”?  Created by a popular composer of that era, George M. Cohan, this particular song was the first to sell over a million copies of sheet music as part of a musical revue called “George Washington, Jr.”.  Perhaps that makes it one of the first chart-topping hits of American history.

Here’s an animated video of the version that most folks recognize and enjoy.

But what about the original “Grand Old Flag?”  Why was the title “You’re A Grand Old Rag”?  The story is told that George M. Cohan found himself seated next to a veteran of the battle of Gettysburg from the civil war one day. The soldier had a worn and torn, but carefully folded American flag.  When Cohan asked about it, the vet replied – “Ah, she’s a grand old rag” and that became the original title of the song.   As time went on, many performers and groups objected to calling the flag a rag.  After several years, Cohan relented to popular sentiment and the song became “Grand Old Flag”.

If you look at the complete lyrics, there are some odd lines and references in the song.  It seems that the writer slipped the titles and lyrics to other patriotic or popular songs into this piece of music.  It was a clever way of sharing some of other songs that he used in his George Washington musical, such as “Yankee Doodle” or “I Wish I Were In Dixie” (Way down south in the land of cotton). And the lyrics “should auld acquaintance be forgot” is clearly from the old time classic “Auld Lang Syne”.

When this song is sung by kids or for kids, most people use the chorus only.  That’s probably because the two original verses have language that seems a bit outdated  to modern ears.  It would be hard to find anyone today that might say: “by gum!”, “I’m no cranky hanky panky” or” I’m a dead square, honest Yankee”.  Still, with all that said, the chorus of the song is a patriotic gem.  It’s easy to sing and shares powerful feelings of what it means to love and cherish your country and treasure one of it’s most honored symbols.

When I recorded a version of this song, I used old timey instruments. I played the spoons as the rhythm and had an old-fashioned jaw harp as well.  I remembered my uncles who had served in the 2nd world war using really simple instruments like this and how the song made them feel proud of their service to the USA.

Here are the most popular version of the lyrics from the chorus:

Daria’s Children’s song version of You’re A Grand Old Flag (complete with spoons and a jaw harp) at:

George M. Cohan was a prolific songwriter as well as a playwright, composer, lyricist, actor, singer, dancer and producer. You can find out more about him here:

And it sets my brain a-reeling,

When I’m listening to the music of a military band.

Simply sets me off my noodle,

It’s that patriotic something that no one can understand.

“Way down south in the land of cotton”

And that’s going some, for the Yankees by gum!

Red, white and blue, I am for you!

And I’m mighty proud of that old flag

That flies for Uncle Sam.

Though I don’t believe in raving

Ev’ry time I see it waving,

There’s a chill runs up my back that makes me glad I’m what I am.

Here’s a land with a million soldiers,

That’s if we should need ‘em,

Hurrah! Hurrah! For every Yankee tar

Hats off to you

You can hear a 1906 recording of the complete song – sung by Billy Murray here: